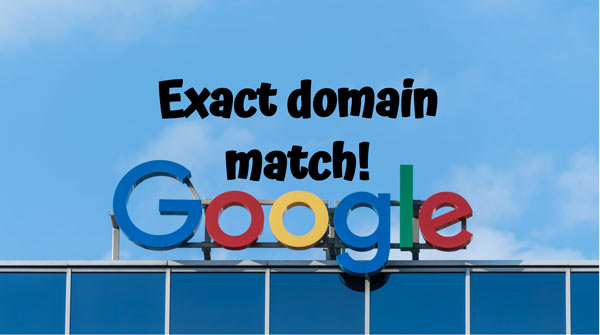 Welcome to another article in my SEO series of 2019. No really. Let us first try to understand what is the exact domain match and partial match domain. EDM & PMD respectively. Google works really hard to fill up all the intelligence gaps. So does the webmaster, who do exactly opposite.

They want to get the maximum out of the loopholes from Google. Let me explain this with an example. Supposing you run a business. let’s say you are into gems and jewelry. Furthermore, the base of your operations in Jaipur. Which happens to be my town. If you pick a domain that has gems and Jaipur, your website would rank higher in Google SERP. This was what was happening before when Google realized its loopholes. Then came the Google update for EMD and a tweet by Matt Cutts.

Check out SEO tutorial videos on my YouTube channel

Table of Contents hide
1 Let’s define EDM in Google SEO more technically
2 What is Partial Match Domain or PMD?
3 Then came along the Google update for EMD in the year 2012.
4 So does EMD or PMD hurts?
5 Why is branding important?
6 Summing up
6.1 Related Posts:

An exact match domain (EMD) is a domain name that exactly matches the keyword you want to rank for. If you’re trying to rank for the keyword “Jaipur SEO firm,” your EMD would be www.Jaipurseofirm.com. Around 10 years ago Google used to give a huge rank boost to EMD websites that exactly matched the keywords. most noteworthy, if you were not able to get an exact domain match, you can strive to get a partial match domain. (PMD)

What is Partial Match Domain or PMD?

A partial match domain does not have the same ranking power as an exact match domain, but it was way better than a domain without any target keyword in it. Think about it!

Then came along the Google update for EMD in the year 2012.

Google with a lot of research and development wing came out with a Google update for EMD. A solution to webmasters exploiting this loophole. They started giving more attention to the quality of content rather than EDM making it to the top with poor content.

Google update for EMD stated that even though you might get an edge if you have the desired keywords, your ranking will not be as high if you have poor content quality. Matt Cutts who was former Google chief of webspam announced something in particular which upset a lot of EMD websites.

Cutts the current administrator of the “United States Digital Service” in Google tweeted this in the year 2012.

So does EMD or PMD hurts?

The answer is quite simple. They don’t! It is not about the domain here. It is about content quality. If your content does not provide adequate value to the user, even though you might have an EMD or PMD domain, sooner or later Google will pull it down on their ranking matrix. Google’s Gary Illyes has said that he is actively hunting for spammy Exact Match Domains or EMD’s that are ranking in Google Search. However, if your domain is giving value to user it stays in the top ranking.

Gary very effectively said in his tweet that using EMD or PMD domain is not a problem. The problem is when it is used with other spam tactics. Spammy sites set up for the purpose of ranking, generating huge amounts of traffic, and making quick money is something that Gary Illyes along with Matt Cutts is on the lookout for.

Why is branding important?

Think about a company that did not use any keyword in its domain and still became a giant. For e.g., if you take a look at the Indian e-commerce sites such as Jabong, Myntra, or Amazon for that matter, these are not EMD domains. However, they are doing pretty well in terms of business.

Using a branded domain gives the impression that you’re serious, big-time and here to stay. It’s easier to remember and find online. Like for e.g. my Blog Shutterholictv.com. Branding is important as it differentiates you from other competitors and is easier for people to remember your domain.

EMD & PMD does provide a little advantage when it comes to SEO. Provided that their motto is to provide exact and meaningful information to the user. However, in the end, I would like to quote that do not be dependent on the EMD’s or PMD’s. Work on quality content and optimization, the rest will come by default. Exact and partial domain do provide some edge, but it is always the quality content that win’s in the end.