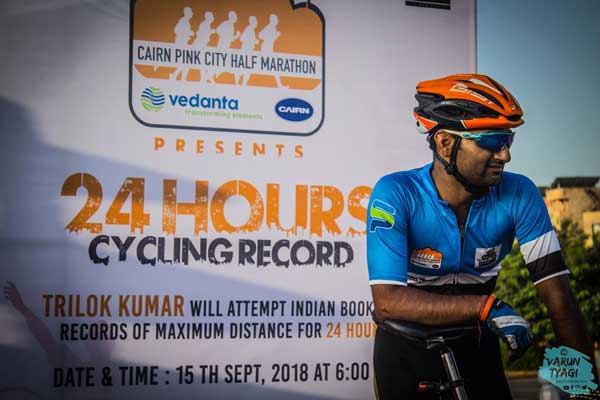 24 hours cycling record: Meet Trilok, AKA Provelo born 11th November 1993. A name which is well known in the Jaipur cycling domain. In a recent attempt to cycle continue for 24 hours, he did emboss his name in the Indian cycling arena too.

How did it begin?

His interest in cycling started when he was strolling through the city of Ajmer on the new year’s eve of 2013 with his family. He saw army rider group and was mesmerized with the aura radiated by that rider group. It took him well thought six months to make up his mind and buy his first bike. He has been a professional rider since early 2014.

Provelo has participated in over 40 national cycling events bagging 20 podium finishes. He furthermore, holds three records which got a place in India book of records.

Trilok is a young & vibrant chap with his role model as one of the fittest actors in Bollywood i.e. Akshay Kumar. He follows his role model to the core and pumps up discipline as a key component in his daily schedule. Although, he currently lacks funds and apt coaching which are required to make his mark on the international circuit. Even though his family is not very keen on him taking up cycling as a full-time career, he still manages to keep that spark of cycling going in him.

In case you want to help or contribute towards his coaching and fund him for events please get in touch with him. Click Here

As a professional road biker, he trains every day. He trains for over 500 km in a week. The training schedule is a mix of speed drills, incline training and power training. In the city’s cycling circuit he is the most knowledgeable rider. So in case you want to pick up cycling or want some advice or suggestions related to cycling, you know the person you need to get in touch with.

So in case you are in Jaipur, do not forget to meet the cycling icon of our city. Take a ride with him, if you can catch him.

What is a sitemap?

Choosing Domain Name – First Step in Setting up Your Blog