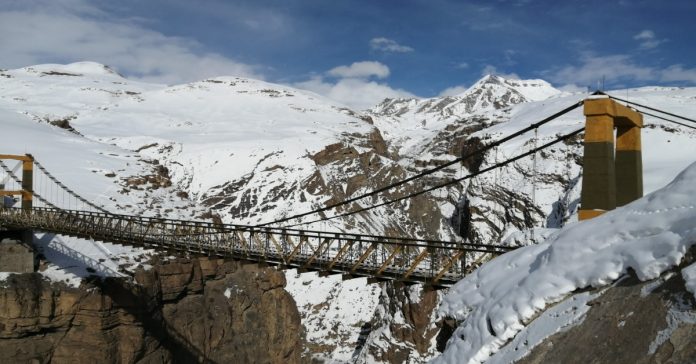 My Spiti tour was incredible, I witnessed some of the finest man-made structures in the world. Amazing places like Tabo Monastery, Key Monastery, highest post office in the world. My next adventure got me to Chicham bridge.

The world is a vast and expansive place that is full of surprises. There are cultures to explore, landscapes to explore, journeys to take, and lessons to be learned. It is filled with boundless generosity on one side and harsh realities on the other.

This same excitement led me to a bridge that has etched its scenic beauty in my memory forever. For us city folks, it is hard to imagine a world where internet services do not exist. After all, our entire life is ingrained with social media. Now imagine that you are in a distant part of the world where having access to an internet network is a privilege standing in front of the world’s highest suspension bridge

You can’t even get a cellular network, let alone internet services. It is certainly hard for city folks like us to imagine but such a place does exist. But folks, this place is amazing and you really do not need to have a cellular network here. The world’s highest suspension bridge AKA Chicham bridge stands proudly in Spiti valley.

There is a road here, but it does not meet the criteria to be labelled a ‘’real road’’ for the most part.

A journey that is not only breathtaking but also full of adventures. This location is cut off from the rest of the world for over three-quarters of the year because of the constant falling of snow.

It has the distinct impression of being cut off from the rest of the world due to the town’s secluded location and harsh terrain. It is a luxury to even get internet access and most cellular networks are extremely unreliable. Plus being the highest suspension bridge in the world, this is not accessible throughout the year because of heavy snow.

My eyes were not deceiving me. This is where Spiti Valley, located in the Himachal Pradesh region of India, close to the border with Tibet, led me. There is a bridge there that is unlike any other in all of Asia, and you have to see it for yourself to believe it.

Experiences in India’s Spiti Valley are once-in-a-lifetime opportunities. Some of those attractions may be well-known to tourists, but there’s a little-known gem that’s worth seeking out nonetheless. Certainly, the city is home to the incredible Chicham Bridge, which stands as the world’s highest suspension bridge.

An hour’s journey over stunning scenery will get you to the Chicham bridge from Kaza, which is the largest town in the Spiti valley.

Chicham Bridge, located in the Spiti Valley of the Himachal Pradesh region, widely recognized as one of the highest suspension bridges in all of Asia, spans a canyon between two villages in Spiti Valley. This bridge of an incredible 13,244 ft in height links the villages of Chicham and Kibber.

Creating this bridge shortened the distance travellers had to go from Kibber to Losar by 40 kilometres.

The gorge/water stream below is called Samba Lamba Nallah. In addition to making the trip faster and safer, the Chicham bridge also saves travellers half an hour. In the past, the travelling time from Kibber to the village of Chicham would often take between two and three hours.

However, the residents of the area constructed a ropeway over ten years ago, and it has never been damaged in any way. Prior to the construction of this bridge, the residents of Chicham had to traverse this region through a perilous ropeway. To go to the opposite side, you had to manually pull the rope on your own. The container that was mounted on the pulley of the ropeway was utilized in the transportation of virtually anything.

This was a self-operated manual ropeway. Imagine if something went wrong when you tried to self-operate this manual ropeway. You would find yourself hanging 1100 meters over the bottom of a gorge and even worse there is no one nearby to aid you while you were in this precarious position.

To think that the villagers had to use this dangerous ropeway every day to cross over to the other side makes me feel extremely grateful for the life of privilege that I lead. The determination of the inhabitants of Spiti, as exemplified by the Chicham Ropeway, is truly remarkable.

Construction of the Chicham Bridge

As you may imagine, constructing the bridge in such a steep grand canyon presented many challenges. Around 15 years of labour went towards its completion, which means that this brand-new bridge spent the better part of two decades getting built.

It finally opened in 2017 much to the excitement of the villagers. Villagers of Kibber and Chicham no longer had to use this pulley-driven ropeway to get from one village to the other after the opening of this bridge in 2017.

The bridge’s construction was extremely expensive, coming in at a staggering INR 485.50 lakh These villages finally got some much-needed relief as a result.

Chicham bridge has recently grown popular among tourists, who are often seen filming or photographing the event. After all, this bridge has the distinction of highest suspension bridge in the world.

Then there is Instagram, which is stuffed to the brim with breathtaking pictures taken on the bridge.

What to do at Chicham Bridge

If you are hungry you will find these food vans set up by the locals. You can have breakfast and lunch at this place. The food options are limited but tasty. I always found mountain food to be very delicious so I won’t complain.

Since this bridge is recently constructed and little-known, it was not mentioned in any of the Spiti-related materials I combed through in preparation for my trip. Me and my friends, we were meant to pass via Rangrik on our way from Kaza to Chandratal Lake, but little did we know that another route awaited us.

There is a new path that may be taken to reach Chandratal, and it is a beautiful one. This new path was via the Chicham bridge.

In addition to being an impressive feat of engineering, the steel truss bridge also makes for a lovely backdrop in any number of photographs. Tibetan prayer flags of five different hues (blue, white, red, green, and yellow) adorn the bridge.

The mythical Snow Leopard that lives in the Himalayas spends the winters in the gorge where the bridge was erected, and it is a popular hangout location for the leopard.

Our Journey to Chicham village via the Chicham Bridge

The best part about this was that I was able to see both the villages of Chicham and Kibber on the same tour.  The road from Kaza to Chicham Bridge is very easy to travel on during the warm summer months. On the other hand, the onset of winter brings with it treacherous driving conditions, since the region is prone to patches of black ice and heavy snowfall.

Since the village of Kibber was in our path en route to Chicham from Kaza, it only made sense that we spent some time there first. In the winter, Kibber is a popular destination for those hoping to get a glimpse of a snow leopard. I was really hoping to see a snow leopard but we were running out of time. After our brief stay at Kibber, we went on our way to Chicham village.

Chicham is a village in the Indian Himalayas known for its isolation. Spiti Valley is often regarded as one of the most picturesque regions on the entire planet.

This region is home to a number of breathtaking natural features, including lakes, gorges, glaciers, and snow-capped mountains. Because of this, those who are interested in experiencing new things come from all over the world to visit Spiti valley.

In addition to that, there are a lot of people that ride bicycles here to explore the area. There are a few families that have been living in the same remote village for several generations, despite the fact that the village has no infrastructure and no communication.

Nevertheless, the combination of the breathtaking scenery and the kind demeanour of the locals made this location perfect for our little getaway.

In Chicham Village, there are a few homestays that visitors can book. We weren’t expecting anything particularly extraordinary here, after all, it’s a village, but the hosts of the homestay were so generous.

They did their best to ensure that we had a pleasant stay. Because Chicham is only a small village, there are only a few homestays located here. Because of the large number of tourists that visit Kibber for the majority of the year, you can expect the pricing in Chicham to be lower than those in Kibber.

On the bridge, you will find that there are almost always people taking pictures of the scenic view that this bridge offers. The view that one gets from the bridge is just breathtaking.

The drivers are aware that there are tourists on the bridge, and as a result, they travel at a more leisurely pace, providing the tourists with more opportunities to take photographs.

Tourists from India flock to the area near Kibber and the vast Spiti River valley because of the extraordinarily high one-lane road bridge, despite the fact that getting there requires travelling on bumpy dirt roads for several days.

Guests can choose from a variety of places to stay, including hotels, monasteries, cottages, and campers in the area.

The village of Chicham is located in the Spiti Valley and is characterized by its desolate beauty. Chicham is a tiny village, so don’t expect a long list of tourist spots. The area’s breathtaking scenery is the main draw.

Travelling between Kaza and Chicham, you will be treated to breathtaking scenery. Next in line would be the tranquillity and quiet of the setting. It’s the kind of setting that’s ideal for unwinding and getting in touch with one’s inner self.

The name “Chicham Bridge” has helped to bring it a great deal of notoriety. It is one of the most breathtaking bridges in all of India, which is precisely why so many people are familiar with it. It is an amazing place to visit, and you should visit it when you get the chance if you’re ever in the Spiti Valley area.

Any questions related to Chicham Bridge, please leave them in the comment section below. 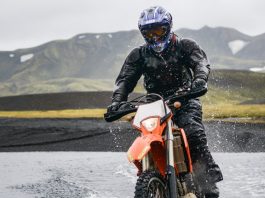 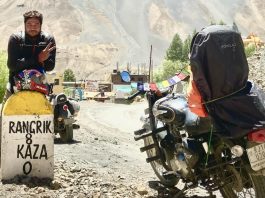 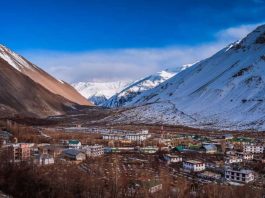 Things to do in Tabo village