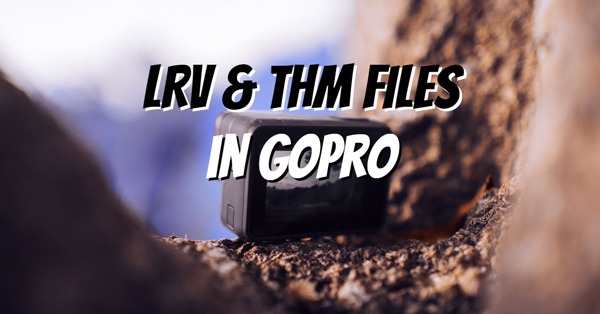 LRV & THM Files in your GoPro, have you seen them before? One of my friends called me the other day and inquired about LRV and THM files. What he did was he copied the media folder from his GoPro 8 not with the GoPro app, but just copy-pasted the folder directly from GoPro. Never do that friends.

There is a reason why GoPro came up with the GoPro Quik application for file transfer. These THM and LRV files in GoPro are a short abbreviation for low-resolution videos and thumbnails respectively. Having said that, this issue is more common when creating 4k videos. I have been using the GoPro 7 and GoPro 5 for quite some time now but did not encounter this issue in 1080P however, things are different when creating videos in 2.7K or 4K.

WHICH GOPRO CAMERA IS CAPABLE OF CREATING THESE LRV & THM FILES?

At first, I thought it is only the higher versions of GoPro that are capable of creating LRV & THM Files. However, when I starting digging deeper I realized that even the old GoPro’s were creating these files. Below is the list of GoPro’s that creates LRV and THM files.

Let’s get right into it. Read more to get the maximum out of your GoPro.

WHAT ARE LRV FILES IN A GOPRO?

LRV is a short abbreviation for “low-resolution files”. The question is Why does GoPro create these files? Now imagine you capturing a 4k video in your GoPro. Now if you try to play the same heavy file in your GoPro to get a preview your camera would no nuts. Imagine playing heavy 4k video on that small device.

The actual output that you see on your desktop or your laptop is the 4K video file which is heavy. In simple words, GoPro does not play the actual heavy files that are being created. Instead, it plays low resolution or LRV files on its screen.

WHAT ARE THM FILES IN A GOPRO?

These thumbnail images are referred to as THM files. The image you see in the video above is a thumbnail image, just like in GoPro for your high-resolution videos.

WHY ARE THM AND LRV FILES NEEDED?

These files are needed because your GoPro cannot play the actual heavy video files that you create in an amount of higher MB value or GB. So low-resolution files are needed so that your camera can play the file on its screen in case you want to look at the preview. These files will always be created if you are shooting in 4k mode.

If GoPro does not create these files you would not be able to see the preview of your 4k videos. This of course will be a big issue as I always take a look at my footage once I am done shooting. I do this to ensure that I have exactly the same footage and same frame that I need for my vlogs and what I wanted in my mind.

CAN I PLAY THESE THM AND LRV FILES IN MY GOPRO?

Yes you can but they are poor in quality so it would be of no use. However, let me guide you on how to open these files.

HOW TO OPEN LRV FILE?

If you want to play an LRV file just change its extension to .mp4. This will change this low resolution into a media file and you can play it via any external player like VLC. The resolution and the quality of this file will be below average though.

HOW TO OPEN THM FILE?

You can view a THM or a thumbnail file by the same procedure as you used to open an LRV file. In the LRV file, you changed the file extension to .mp4. However, in the THM file since it’s a low-resolution image file you can change the extension to .png or .jpeg to view it. Isn’t it simple? However, you won’t be able to make use of this image file as the quality of this image will be extremely poor. It is meant only for viewing on the small screen of your GoPro.

WHY DO I GET LRV & THM FILES IF THEY ARE NOT USEFUL?

A lot of people follow the wrong procedure to get the video files out from their GoPro. When you connect your GoPro to your computer or laptop there are two ways by which you can get your video files.

Firstly, copy the root folder directly from your laptop or computer.

I connected my GoPro 7 black to my laptop and I got the icon as seen in the image above. Now I can double click this icon and get into the GoPro root folder and copy the entire folder. If I do that, the THM and LRV files will get copied as well along with the 4K heavy files.

However, I always advise people not to copy their files this way. This is a bad practice of copying files and something you lose your 4K files and copy only the low-resolution files. So never copy the files like this.

There is a reason why GoPro did a lot of effort in creating Quik. This is because that software updated to its latest version knows what files to extract and what files do not. I always extract my files via the GoPro Quik app.

So my advice would be always to use Quik to download your files from your camera. Else, there might be issues when copying the folders directly. Furthermore, this is such an amazing software, I mean the extracting is easy. You have the option of deleting or not deleting files after extraction. It is amazing customized.

DO I NEED TO SAVE THESE THM AND LRV FILES?

Not at all. You don’t need to save them at all. It is only the actual mp4 file that is of use. These files even if you save them will be of no use to you. These are temporary files and are only useful when you are creating videos in the GoPro app. Else if you are using any other video editing software then the heavy mp4 video file would suffice. If you accidentally delete them, don’t worry. Unless you are using the GoPro app to create or edit your videos you would do just fine. At the end you only need the 4k heavy mp4 file in external editors.

So, that was all about the THM and LRV files in a GoPro folks. If you have a question please leave them in the comment box below. I would try to get to you ASAP.