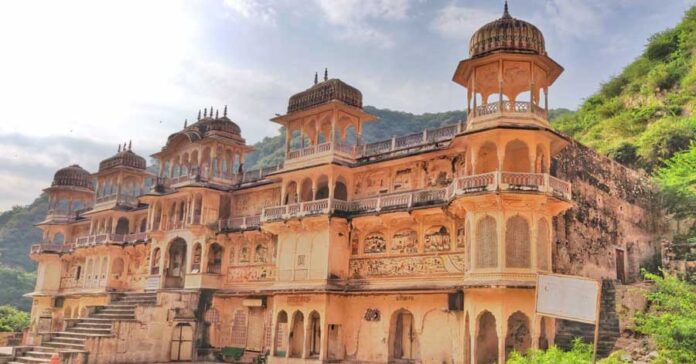 Also known as the Monkeys’ temples, the Galta Ji temple is an old shrine located in the Lush Green hilly area of the Aravali hills of Jaipur in Rajasthan. This is one of the best places to visit as it gives a scenic view o the city of Jaipur on the way. The temple consists of a series of temples and ‘Kunds’ (reservoirs) built in the narrow crevices of the ring of hills that surround Jaipur.

The Kunds are filled by the natural spring emerging from the upside of the hill. The temple consists of the temples of Lord Hanuman, Lord Rama, Lord Krishna, Lord Surya, and Lord Brahma.

How to reach the magnificent Galav Ashram

The Galta Ji temple is located in Khania Balaji town which is around 10 km east of the town of Jaipur. You can either come from your own vehicle or hire a cab. The best way to reach the place is first to reach Jaipur and then book a cab to the place or take an e-rikshaw (tuk-tuk).

Best time to visit the temple

Though the Galta Ji temple is open throughout, it is best to visit in spring or winter, i.e. October to March roughly. This is because, in summers, it is hard to climb up there as it is sweaty and uncomfortable. You can see a lot of pilgrims and temples coming to the temple at the Makar Sankranti festival in January as it is celebrated with great pomp.

Monkeys can be playful and dangerous both at the same time, so if you want to click the view of monkeys taking baths and jumping around, the evening is the best time to visit. The temple is open from 5 am to 9 pm.

The Galta Ji Temple and the place of Samadhi of Galav

Located in the V-shaped valleys of Aravali hills, Galta Ji temple as we mentioned before is a series of temples and Kunds. The temple architecture is Rajputana Style with richly ornamented Facades, fresco paintings. The temple is entirely built-in pink sandstone having pavilions with intricately carved pillars.

The frescoes (a type of wall painting) depict  Hinduism stories. Among the other temples in this series, Shri Sitaramji and Shri Gyan Gopal Ji temple are both built-in Haveli style. As per common belief, the Idol of  Shri Ram Gopal Ji at Shri Sitaramji temple resembles both Lord Rama and Lord Krishna.

This water flows to the Kunds and Baolis (Large reservoirs) here. It is said that the Kunds are never dry. There are 7 Kunds in the temple which are;

Gopal kund here is known as Janana Kund which is a bathing space for ladies and for men, the Mardana Kund,  there is Surya Kund. This series of Kunds makes it a special attraction for tourists as the water flowing in Kunds is freshwater. In addition to this, there are Two caves named after Galav Rishi and Krishnadas Payo Hari Ji.

History and Legacy of the magnificent Galta Ji Temple

The Galta ji temple was built by Diwan Rao Kripa Ram, an attendant at the court of Maharaja Sawai Jai Singh II, in the 18th century. Before they built the temple here, the place used to be an abode for Ramanandi Vaishnavite Sadhus. The yogis and sadhus were attracted to the place by the mystical and spiritual powers of a Ramanandi Sadhu called Krishnadas Payo Hari who lived only on ‘Milk as the only diet’, thus being called Payo Bhaksha. This name Payo was added to his name after this.

Ramanandi sect comes from saint Ramananda, a follower of the Ramanujacharya sect of Vaishnavism in the Hindu religion. They consider themselves to be the descendants of Luv and Kush, the sons of Lord Rama.

An important source of history of the Northern Indian devotion, the poem “Bhaktamal” was written by Guru Nabha Dasa Ji at Galta Ji, based on the account of the Bhakts across sectarian paths. The founding philosophy of the International ISKCON movement started by swami Prabhupada was borrowed from Govind Bhashya written by Swami Baldeo Vidya Bhushan in Galta Ji. Govind Bhashya is a commentary on Vedanta Sutra and was written in 1718.

This place is said to be the abode of Galav Rishi, the great-grandson of Lord Brahma. He observed penance (Tapasya) for 60,000 years back in Satyuga as per the Mahants of the temple here at this place and got blessings from God. This resulted in a branch of Ganga emanating from this place. This Gupta-Ganga (the secretly flowing branch) is also known as Galav Ganga in the honor of the Rishi. A rock called ‘Gaumuk’ which literally translates to the mouth of a cow is the origin point of Galav Ganga.

It is believed that in the Kartik month of the Hindu calendar, on Kartik Poornima (the full moon), the Hindu Holy Trinity of Brahma, Vishnu, and Mahesh(Lord Shiva) visits the place. Thus, taking a dip in the Galta Ji temple Kund is considered to be blessed on this day.

Another story says that One completing the Chardham and Saptpuris, which are considered to be quintessential in the Hindu religion, must come to the Galta Ji temple and take a dip in the sacred Galta Kund in order to complete the pilgrimage. Goswami Tulsidas Ji, the author of the epic Rama Charitmanas is also be said to have stayed here to complete several sections of the scripture.

What NOT TO-DO while visiting this famous Galta Ji Temple and site of Tapasya.

Nearby Attractions to explore when visiting Galta Ji Temple

Visitors should Visit the Shri Gyan Gopalji temple, and Surya temple located on the top of the temple complex, which is located on the top. This site is a lesser-known and lesser-visited one. The site provides a serene atmosphere and the best views of the sunsets. Another place to visit is Sisodia Rani ka Bagh.